Hey, I'm writing into you about unsigned bands...


Recently I've been getting into more and more unsigned bands & support acts..and have found/seen so many Amazing bands.
I think it's a shame that they don't get more recognition for what they do and for how hard they work..
I also think that magazines like yourself don't have an area or bigger area in your magazine for unsigned or upcoming acts...(dates for gigs & links on how to find them etc)
When there are so many awesome unsigned bands out there. I think it's time to stop sweeping them under the carpet and notice them more....! ;D


(As I'm homeschooled and have a big interest in bands and the band industry my homeschooling Welfare/home educator officer has said that I need to get out there and learn more about it by gigging and getting up and asking stuff,I've been to soundchecks talked to bands, producers,photographers and interviewers.It's Amazing how much I've learnt from it all and have taught people...my homeschooling officer also said I need to write it up and what better way to do that then to write off to you!)
Over the time that I've been giging and watching unsigned/support acts I've seen to be honest some not so good bands and some truly amazingly awesome bands...

(The band was formed last year by Glasgow singer/front man Allan Sieczkowski. Since then, they have been writing and recording their debut album soon to be released summer 2012. Burgundy Sky is the first of two singles to be released from the album. The band have also filmed various session music videos All receiving thousands of hits on YouTube)


Allan Sieczkowski - (Vocals) has recently said to me that" Euan,Jay and myself are the face of Little Eye ...you'll always find us at the gigs" but When they need other band members they use people they know and trust...like James Duffin ( rhythms guitarist) who your also find does the mixing on most bands tracks in glasgow!
All the members are amazingly in 2 or more bands! These guys are truly talented if you ask me..

I've been following/supporting them since march last year and we are now regulars to their gigs..as we(me and my mum) travel up for Shropshire to see them in Glasgow which is a 8 to 9 hour journey on the train.. But they are so worth the journey! We've been to see them play in Stereo, Glasgow which was the first of many gigs and it was Amazing . We've also seen them play an acoustic set up in Kirkcaldy ....I'd never seen an acoustic set before and was shocked by the pure beauty of the sound...that was also the gig where I learnt what a cajon (acoustic drum box) was! and Euan the bands lead guitarist showed me how it works "there's a hole in the back which a microphone goes in and it picks up what Jay (the bands drummer) plays...!"

In the time we've been following/supporting them they've
Won the likes of "The Young Scott Awards" which got them picked up
By their Co-manager Malcolm Blair. And "Clyde 1 In Demand Band Of The Year". and have recently been nominated for Best Rock/Metal alternative at SAMA and voting starts as of next week!
And the awards take place/announced 1st March 2012.To which I have been invited (with my Mum) to attend by the events organiser. (we have standard tickets,but my mum is trying to get VIP so we can meet these bands) 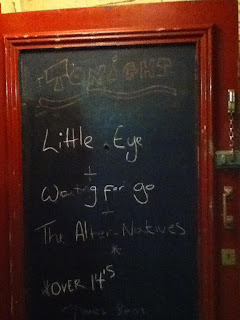 On the 26th of January 2012 we went up to see them play their first headline show in KingTuts which was a sellout gig!
They blasted the show off with their new and unheard before song called PANIC! Which was an instant hit with the fans.. But is very different from most their songs! They quickly moved on to play,Potential future adventures ...& Ever better..
The next song was just mind-blowingly good...as Jamie D (Rhythms guitarist) sits down on a fold up chair with an electric guitar strapped over his shoulder and tuning in an acoustic guitar on his lap...you know your in of a treat! 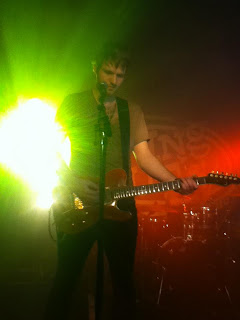 As the first cords of the acoustic guitar fill up the room fans quickly grab their cameras to capture the first time "I can't relax" had ever be played LIVE...as the last of the acoustic cords ring to an end Jamie D (Rhythms guitarist) quickly makes the SWITCH by whipping off the acoustic guitar and jumping back into the song as, (the drums kick off) on an electric guitar..truly stunning!
They went onto play , "The fate of us,Cold Warrior" and started to slow it down with a sad song but with an up tempo beat "First flight" then finally playing a truly beautiful tear welling "Remember yesterday" which left some fans Very closes to tears! 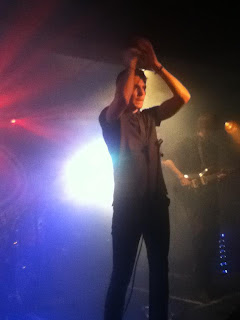 The band finished the song noticeably short and running of the stage....leave fans wanting more as the chants started off for them to " sing one more" the band re entered with (vocalist) Allan Sieczkowski saying "we just knew 8 songs wasn't enough for you guys" They kicked back off with a new song called "Choked Up" And finally finishing their 60 min act/set with a well know song "Distort the sky"where all the fans joined in singing as Allan (vocalist) pointed the mic to the crowd....
As the cheers died down Allan bids everyone a final get home safe as the band waves the fans off as they leave the stage...

It was a night to remember it truly was!

The most liked and filmed ,with fans commenting "this songs their best song you better film this one.were " I can't relax" and "remember yesterday!"